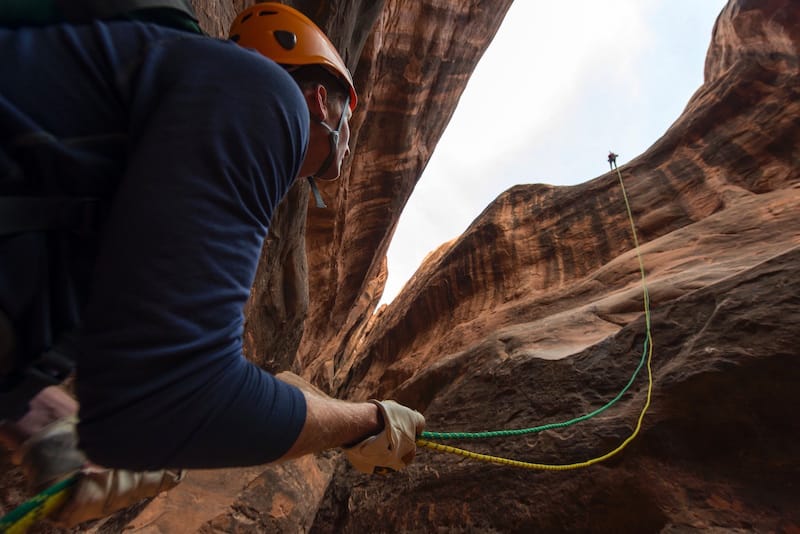 Chances are that at some point during your climbing journey, you will come across someone (in real life or YouTube) climbing with two ropes tied onto their harness and you will ask yourself: why the heck is that?

Well, that is because they are climbing with half ropes (also called double ropes by some) or twin ropes.

Fair enough, you’ll say, but what are half ropes and twin ropes? And are they different? Does it really matter?

The shortest possible answer is YES. Half ropes and twin ropes are different, and yes, it does matter!

If you want to find out how and why, keep on reading.

In this article, you will learn how to recognize single, half and twin ropes, how they are different and, above all, which one to choose for which situation! In This Article You Will Find: hide
1 Single Rope: What we All Use
2 Half Rope: What Does It Mean?
3 Twin Rope: What does it mean?
4 Multi-use Ropes
5 Which Type of Rope To Choose
6 Half Rope vs Twin Rope: Things To Consider When Buying
7 Wrap-up

Single Rope: What we All Use

Before we embark in the description of the difference between half ropes and twin ropes, let’s make sure we know how they are different from a single rope.

A single rope is just what you think it is: one rope that you tie into your harness and use for climbing single or multi-pitch sport routes and some trad routes. This is the rope that you use at the gym and at the crag on toprope or lead climbing. It is easy to manage and to belay with and it is the standard go-to rope for rock climbing.

How do you recognize a single rope? Single ropes are marked by the number 1 inside a circle on the taped rope ends and on the manufacturer’s information. These ropes can be used on their own and are usually between 9 and 11 mm thick.

Now, let us look at the ropes that are used in pairs!

Half Rope: What Does It Mean?

Half ropes, also called double ropes, can be slightly confusing.

They are sold on their own, but you always need two: remember, two halves make a whole.

Half ropes are labelled with a “½” in a circle on the manufacturer’s info and on the ends of the rope itself and are usually around 8-9mm in diameter.

When and How to Use

Half ropes are used for trad and ice-climbing and they are designed to reduce the amount of force placed on a piece of gear in case of a fall.

When climbing with half ropes, you tie both ropes into your harness, but, as you progress, you only clip one rope at a time into a piece of protection, alternating the two. This is really important when using ice screws or other marginal (sketchy!) pieces of gear.

In case of a fall, the force exerted on each piece of gear you placed will be less abrupt, as it is distributed between the two ropes and it will avoid them popping out or moving too much.

Half ropes are also great when climbing wandering routes, in which the placements would force a single rope into an awful zig-zag. In this case, you will simply clip one rope to all the protections you place on the left, and the other rope to all the gear on the right. This greatly reduces rope drag, making your climbing far more enjoyable and avoiding excessive walking of gear.

In some cases, half ropes are the best choice when you climb on sketchy ground, as if one rope gets damaged by a falling rock, you still have a decently thick rope to catch you, even if half ropes are NOT designed to take falls as single ropes. Climbing with half ropes will allow you to place gear to the left and right of the climb without causing excessive rope drag, it will make it safer to use marginal protection and it will also allow you to climb in parties of 3, as a lot of half ropes these days are rated so that you can second on a single strand.

On the other hand, it might take some time for the belayer and climber to get used to handling two ropes, and the weight of two ropes might become a nuisance on routes that do not require rappelling.

The first recommendation is definitely to buy them in different colors. That’s (almost) the whole point of having half ropes: you want to be able to distinguish them when clipping one or the other and when rappelling.

Here are some good ones on the market:

Check Price and Reviews On Amazon
Triple rated and extremely versatile. It might be a little too heavy for ice climbers.
Rating: single, half and twin
Weight: 48g/m
Impact force: 5.5kN (half)

Lightweight and easy to handle. It might not be as durable as thicker options.
Rating: half
Weight: 45g/m
Impact force: 5.5kN

Twin Rope: What does it mean?

Twin ropes also come in a pair and are always used together. They can be recognized by the symbol of two overlapping circles (similar to an olympic logo) within a circle.

Twin ropes are usually very skinny, between 7 and 8mm. Having just one in your hands will feel weird and you’ll understand why you always need to use two at the same time!

When and How to Use

The main difference between using half ropes and twin ropes is that with twin ropes you must clip both ropes to all the pieces of gear.

You basically use twin ropes just like you would a single, thicker rope, both when belaying and clipping, but they have the added advantage of having two ropes for rappelling and carrying on long approaches. Twin ropes are often used in ice climbing and are not as popular on rock.

In dangerous terrain, they also might save you if one gets snapped by a falling rock or sharp ice.

Twin ropes are usually ultra-light and great for sharing the load when carrying them and for rappelling, as they give you twice the length of a single rope. They also might add a bit of extra safety.

On the other hand, being so thin they tangle easily and belaying and climbing with them is not as straightforward as with just one rope. The rope drag might also get pretty bad with two strands going through each carabiner…

To make things even more confusing (or interesting?) developments in technology and materials means that nowadays, many ropes are rated for multiple types of use.

What does this mean? It means that a pair of ropes can be used both as half and as twin ropes, according to what you need on a specific climb.

Some are even rated as single, half and twin, meaning they can be used in all three ways!

If you’re unsure which one to buy, or if you think you will need all of them equally, it might be worth investing in a multi-use rope.

Here are some of the best ones with some specs:

Which Type of Rope To Choose So, now you know what is what, and you learned how and when to use these two different types of ropes.

What is the best system? Well, it depends of course. As you can imagine, there is no one correct answer. Every climb is different and each situation presents different challenges. Deciding which rope system to use is one of them.

Take into consideration the type of route you will be climbing, the terrain, type of rock, temperatures, climbing style, and then choose the system that will give you the best efficiency and safety.

If you’re unsure about tackling a specific route or peak, consider asking an expert or hiring a guide to help you plan and carry out your climbing project.

Can You Use A Half Rope As A Twin Rope?

The safest answer is NO. You should not use a rope for something it has not been rated for. As we’ve just seen, nowadays many ropes are twin and half rated, so if you think you’re going to need both, just buy ropes that have been multi-rated.

If clipped in the same piece of protection, half ropes might not be as dynamic as you would like them to be in case of a high fall factor, which can result in injury.

And definitely, NEVER use twin ropes as half ropes! Twins do not like to be separated, so remember, always clip both ropes in each piece of gear.

Half Rope vs Twin Rope: Things To Consider When Buying Again, make sure you buy two different colors for your twin and half ropes. It might seem like a detail, but it is essential.

Also, think about the terrain you will use them on to decide the diameter you need, both for half and twin ropes.

Ice climbing with a bit of rock here and there? Thinner is ok. If you will be climbing on sharp granite with lots of edges though, you might want something more durable.

Just like with single ropes, consider getting the dry treatment if you’re planning to do alpine and ice routes.

Unless you are planning on a specific route famous for its larger pitches, 60m half or twin ropes will be just fine.

Check the rating and the manufacturer’s info properly before buying any kind of rope, and in the case of twin and half ropes, make sure you get them in the right pairs, meaning that the two ropes have the same rating and thickness, and only differ in color.

Another thing to take into account is your belay device. Obviously, you will need a belay device with two holes, like a Reverso or an Edelrid Mega Jul, but that’s not enough: some ropes (especially twin ropes) might be too thin and slip through without breaking properly. Make sure you check the specs before using your new ropes!

So remember, two halves make a whole, and are clipped alternatingly. On the other hand, twins hate to be apart from each other, so make sure they both go through all the protections you place!

I hope this guide on how and when to use half and twin ropes cleared up all your doubts about climbing with two ropes at a time and that it motivated you to get out there for some new climbing adventures!

Now you know all you need to buy a new set of ropes and use it safely.

And remember, if you are not sure about anything, just ask! There are always plenty of people ready to help in climbing shops, on online climbing forums and in the international climbing community!

Marta Fava
Marta was born in northern Italy and grew up hiking and skiing in the Dolomites. Strangely enough, she began climbing (indoors!) while living and studying in the UK.The night of that first beginners top-roping course at the Castle Climbing Centre, she dreamt about climbing, and knew it would change her life forever. And so it did! After leaving the city she travelled and climbed in many beautiful spots around the world, from the multi-pitch sport routes of Todra Gorge to stunning Yosemite. She has now been based in the wonderful La Mojarra, Colombia, for over two years: perfect climbing weather all-year-round, a simple life in the mountains and amazing red sandstone routes in a wonderful setting… Now, though, the Dolomites are calling… This time for real climbing!

Home » The Differences Between Half vs Twin Rock Climbing Ropes